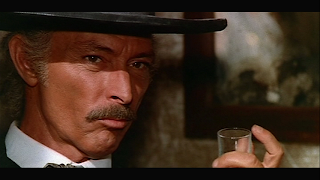 I have been a big fan of Lee Van Cleef for a lot of years. I can’t remember if I first saw him in FOR A FEW DOLLARS MORE, THE GOOD, THE BAD AND THE UGLY or ESCAPE FROM NEW YORK but his presence in any movie means I’m going to be more interested than average. Of course, his casting by Sergio Leone in two of his classic Spaghetti Westerns gave Mr. Van Cleef’s career new life and he went on to star in more than a dozen Italian and Spanish oaters throughout the late 1960s and 1970s. I have been slowly trying to catch up with all of them as I can and have been thrilled to find that I am rarely unhappy with the movies in which LVC stars. Even the lesser works like EL CONDOR (1970) are entertaining and often give him the chance to play something other than his usual stoic gunfighter/lawman/bounty hunter role at which he was so good.

There are only a few ‘big’ LVC western titles that have yet to see and this week I crossed off a highly regarded one- THE GRAND DUEL (1972). I actually saw it under another title (and it has plenty) but the good news was that it was also the first of his westerns I’ve seen on Blu-Ray. Its available on a very cheap Mill Creek Blu paired with the brilliant (if irritatingly scored) Franco Nero western KEOMA (1976) and for about five dollars you can NOT go wrong with this disc. I’m not going to say the movie looks as sharp as it could possibly look but the clarity of the picture is noticeably better than a typical DVD image. The soundtrack was off a few seconds at points in the film but that is unfortunately a problem that crops up often in Italian genre cinema from this era so I’m not going to blame the disc. As long as Lee Van Cleef dubs his character I consider everything else negotiable and luckily he does provide his voice in this one. 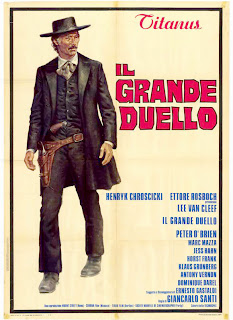 As for the film itself I found it to be very good and I can recommend it to fans of the genre. It lived up to its strong reputation with a good story, interesting villains and some very well played gunfights. There is a fun mystery element to the plot which isn't too hard to figure but the slow reveal of information through flashbacks is well done giving the final revelation pretty effective heft. THE GRAND DUEL isn't LVC's best western but it is better than average.

As is typical in the Spaghetti west the motivations of several characters are mysterious and their gun fighting skills are superhuman making the real question for me “will the director craft a silly film or a serious one”. Often, in poor hands, these movies become overly pleased with their own cleverness and end up playing fast and loose with not just logic but physical reality. I wince when I’m watching a western in which someone starts jumping around on hidden trampolines in the action scenes or acting like they can levitate to pull off some impressive feat. Early on I feared director Giancarlo Santi had chosen this route but luckily there was only one instance of acrobatic excess early on after which the film settled down to play things pretty straight. Thank goodness.