IT'S ALIVE (1973) & opening credits as storytelling 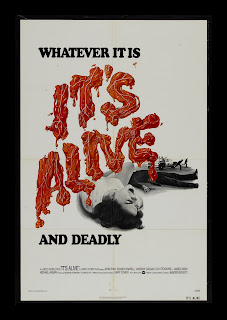 The art of the credit sequence is something I’ve been interested in for a few years. I’ve always felt that a well done opening can really set the mood for a film. If effective a credit sequence can bring the viewer into the film’s artificial world in a way that gives the story room to grow to outlandish levels but still be able to create the willing suspension of disbelief necessary for fiction to work. I first thought seriously about this after seeing a series of especially smart such openings with in a short space of time. FIGHT CLUB’s mesmerizing journey through the cerebral cortex of its main character sets up not only the odd nature of the first scene of the film but in repeat viewings plays as the first joke on the audience. Similarly, Cronenberg’s EXISTENZ has the credits play out over a swirling image that subtly suggests the mind trip you are about to take without making it obvious.

The other night I sat down to watch Larry Cohen’s horror film IT’S ALIVE for the first time in more than 15 years. I had forgotten much about the movie and one of those things was the excellent credit sequence. A black screen is illuminated with a few white points that begin to slowly move about. As they are joined by more of these lights they begin to move a bit more leaving slight trails making them appear to be sperm swimming around in a Petri dish. This impression last a few seconds until it slowly becomes clear that this is a group of flashlights shining in a very dark place as they move closer to the camera. Very sharp stuff especially as it mirrors in brief the arc of the film’s story. It helps that IT’S ALIVE is a very good film that is well worth repeated viewings for its careful, slow and deliberate pace making a bizarre tragic tale really hit home.

There should be a book about excellent opening credit sequences. Maybe there already is one?
Posted by Rod Barnett at 11:29 PM