I have no idea how many times Robert Louis Stevenson’s literary classic The Strange Case of Dr. Jekyll and Mr. Hyde has been filmed. I know it has to be dozens at the very least even if you discount the adaptations that use the story without actually telling the tale of poor doomed Jekyll or ones that take an odd angle such as MARY REILLY. I think I’ve seen about five different films made from the short novel over the years and I find I still have an appetite for more. I even want to catch up with recent BBC series JEKYLL which is a modern day extension of the story and I have an interest in the current US spy series MY OWN WORST ENEMY because of its use of the split personality concept. ENEMY tips its hand smartly by having one of the personalities inhabiting its main character named Henry (Jekyll’s first name) while the other is called Edward (Hyde’s). Clearly this yarn still strikes a chord with the public. 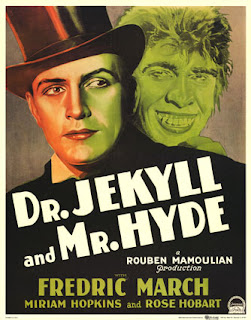 But which of the many adaptations on film is the best? To my mind the 1932 version has never been beaten. Fredric March gives a brilliant performance for which he won a well deserved Oscar and the direction by Rouben Mamoulian is both sharp and stylish (often in the extreme). The film revels in all the abandon that pre-code Hollywood could sling at the screen with the drive of Hyde being so obviously sexual that I’m surprised it wasn’t banned across the land. It’s a hell of a movie and one I think modern audiences would do well to check out for themselves. I doubt any new adaptation will surpass its power.
Posted by Rod Barnett at 8:18 PM