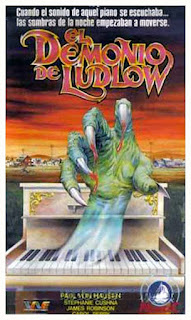 Last week I finally dipped my toes into the mysterious waters of the Weird Wisconsin Blu-Ray box set. To be clear, I originally had no intention of buying this career retrospective of independent filmmaker Bill Rebane simply because the one effort attached to his name that I had seen before was the abysmal MONSTER A-GO-GO (1965). Rarely has a movie deserved derisive discussion more than that failed mess. But after reading a bit I learned the odd history of the film’s convoluted production and realized that Rebane’s other work might be more interesting and less sleep inducing. I’ve purchased films for flimsier reasons. 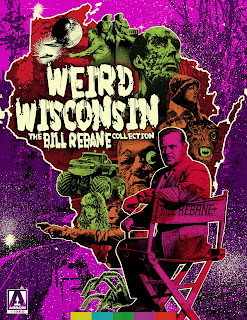 Simply because I liked the title, I pushed play on THE DEMONS OF LUDLOW (1983) and was mildly rewarded. It tells the story of a small rural community that receives the gift of a special piano from a European benefactor. It seems that the foreigner is a member of the family that established this small town but was made to retreat to the old country for some local crime. Regardless of the dubious reasoning, on the two hundredth anniversary of its founding the mayor is proud to accept the gift with the explanation that the European family wishes to contribute something to the townspeople. As you might expect, this piano is part of a curse that serves, each time it is played, to call up vengeful dead folks to kill the descendants of the people that forced the European family to flee. Cue the carnage!

I’m not going to claim THE DEMONS OF LUDLOW is a great movie or an undiscovered classic. It’s very low budget hampers its ambitions several times and the cast is peppered with some non-actors that just can’t convincingly play most of the emotions that are required. But the movie does have something. It might be that it has a certain charm that grows from its outsized ambition or the ‘let’s put on a show’ feel of the entire affair. I found myself wanting the often teetering narrative to find its footing and get its tale told. To be honest, the film got me on its side with what I can only call its earnestness! I wanted the film to succeed and so when it firmly connected, I was happy and when it stumbled, I was more forgiving of its lapses. Even though I was constantly amused by whether the gifted musical instrument was supposed to be a piano or a harmonium I found myself overlooking the confusion about the very non-piano sounds it produced. Would it have been so difficult to dub in piano music when its being played? Or was there some larger reason for the music used? Maybe Stephen Thrower’s book included with the box set will have some information about this mystery.

There are four more Bill Rebane films in the set that I have yet to see and, mixed feelings aside, this viewing has made me eager to try them out. I’m not going to rush through them but I’m no longer dreading the experience. But I doubt I’ll ever watch the high-definition version of MONSTER A-GO-GO. That pain I do not need!