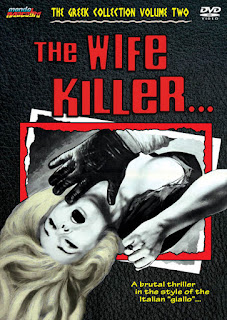 This Greek thriller is very much in the vein of the giallo in some ways while veering from those films in significant ways. There is no black-gloved mystery murderer in THE WIFE KILLER (1976) so that trope is absent. Outside of one early sequence on a yacht the movie doesn’t seem very interested in showing off stylish clothing or homes in near fetishistic fashion either. The missing ‘lifestyles of the rich’ element seems a choice born of budgetary restrictions but the film plays into that absence well by ramping up the sleaze. In fact, the nastier sections of the film’s story are pretty rough as evidenced by the alternate title THE RAPE KILLER. That isn’t as accurate a descriptor as the one Mondo Macabro has chosen to release this under but it can serve as a warning (or enticement) to potential viewers.

I quite enjoyed this filthy little crime tale. It moves at a pretty good pace most of the time and plays its cards close to the vest on several occasions allowing some of the surprises to keep curiosity high. The violence is fairly bloody with the slapping and sexual assaulting of women making for some tough viewing. The plot has some well-done twists with its central idea seemingly pulled from STRANGERS ON A TRAIN (1951). It looks to be a smart, devious plan to get a lot of money without the problem of living with the person who actually owns it. But such secret plans have many trust points that criminals rarely seem willing to honestly negotiate so trouble is inevitable. THE WIFE KILLER is an entertaining 90 minutes and the film’s satisfying finale pushes this into the category of a solid, recommendable effort. Glad I finally pulled this disc off the shelf!