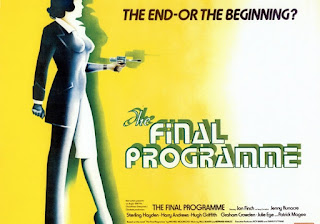 Randy Fox returns to dive back into the science fiction films of the 1970’s.

Unfortunately, THE FINAL PROGRAMME (1973) is one of the lesser-known SF movies from the 70’s. There are many reasons for that including it being savagely cut for American release and that its cast is devoid of major movie stars. But a more relevant reason it is largely unknown is the type of science fiction tale it tells. Adapted rather faithfully from the first of Michael Moorcock’s series of Jerry Cornelius novels it hews closely to the arch tone of the book in ways that might frustrate some viewers. Plot points are not spoon-fed, explanations for odd occurrences are not always made and anyone looking for a solid hero will be left wanting. The motivations for the main character are, by turns, dark or driven by melancholic grief when they aren’t just completely inscrutable. Aware that the world is crumbling around him Jerry seems content to chase his psychotic brother Frank but often affects a disinterest in nearly everything else. “Well, for a start, I'm going to sit here and get smashed out of my mind. And I also have it on very good authority that the world is coming to an end. I thought I'd go home and watch it on television.” 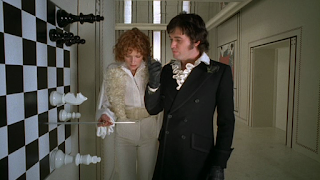 Randy and I spend the first thirty minutes of the show discussing the book series with a focus on the first, of course. We then (eventually) get into a deep look at the film using a faulty synopsis that causes me to complain about one of the more common errors made when summarizing this movie. We talk about the fine cast, the director’s comments about the movie and the difficulty of crafting such a large-scale tale on a small-scale budget. We touch on the locations and the music as well as author Moorcock’s choice for sonic accompaniment that was overridden by designer/writer/director Robert Fuest. And we finally wind our way to the mad ending that is the sole false note for Randy. This touches off a spirited discussion of how I would have liked the final scenes to play out to move things closer to the unfilmable ideas in the book. And then I quote star Jon Finch from an old interview about his involvement in the film. We have a pretty good time!

If you have any comments on the film or the podcast thebloodypit@gmail.com is the place to reach us. Which 1970’s science fiction film should we dig into next time? Let us know. And thank you for listening!