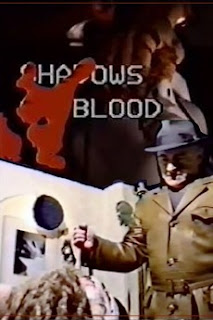 Years ago I decided that, because I did not want to watch SHADOWS OF BLOOD (1988), we would not cover it on the Naschycast. I could simply see no upside to wallowing in what we knew was commonly considered the star’s worst film. I suspected that it would be a painful and depressing experience so I opted to avoid it and instead seek out less reviled fodder for the show. But then a friend pointed Troy and I toward a humorous Australian podcast called Finding Desperado. In that show the hosts conduct a hunt for a lost film that eventually finds them bemusedly watching SOB as part of their research. After listening to the eight hilarious episodes of this podcast I realized that these two funny men had pointed the way toward covering this movie – puzzled confusion. So, we decided to finally dive into what I’ll forever refer to as Naschy’s Nadir. 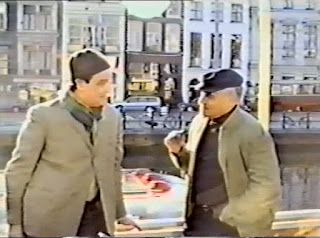 We dig into the genesis of this film starting with some details about the low point that Naschy’s career had reached by the mid-1980’s. It’s doubtful that he would have participated in this shot on video ‘production’ if he'd had anything better as an alternative but chance often leads the dance in movie making. We discuss Lord Sidney Ling who is the writer/director responsible for this film including his bizarre history as a fabulist of the highest order. Finding Desperado relates much more detail about this strange man and his self-aggrandizing nature but we concentrate on what might have influenced the poorly thought out ‘story’ he concocted for SHADOWS OF BLOOD. We trudge through the film trying to understand what might have been intended, occasionally getting lost in the dull sameness of the events onscreen. The sloppy narrative follows two escaped lunatics as they walk (and walk) around Amsterdam murdering random people in a competition to see who can kill the most victims. It is a mostly embarrassing exercise in senseless tedium that, even with its short running time, will test the most devoted Naschy fan. I’m just glad we finally have this one behind us!
We have a couple of emails at the end of the show including an amazing tale from listener Kurt that reads like a possible future noir film. His brief life story is well worth knowing. If you want to add your story to the podcast naschycast@gmail.com is the address where we can be reached. Let us know what’s on your mind! And thanks for listening to the show.
Finding Desperado Podcast LINK
Apple Podcast LINK
MP3 Download LINK
Posted by Rod Barnett at 10:34 AM