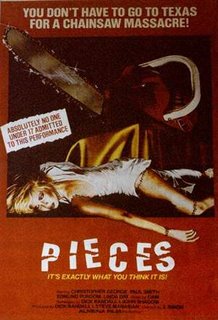 It was during my 9th grade year that I saw my first European horror film and it was on the big screen. Lucky me!


In the 9th and 10th grades I attended a boarding school in . Being trapped in a campus dorm Monday through Friday made some type of escape on the weekend absolutely necessary. Not being overly interested in drugs and only marginally interested in alcohol I usually spent a few hours each Saturday in a movie theater sucking up whatever would throw at me. But on this particular Saturday night I was in for something a bit more…..odd.

Several of us had spotted the newspaper ads for PIECES and were taken aback by the forwardness of the rather lurid image. By this time I had heard of THE TEXAS CHAINSAW MASSACRE but had yet to see it so this seemed even more dangerous. If this was striving to top that film what might be sprayed across the screen? A few of us teenage boys made plans to see this sucker no matter what. Understand- we were under no illusions about the nastier elements of the film. Hell! That’s why we were daring each other to go! We saw PIECES as a test of our masculinity, a rite of passage that without experiencing might point towards us becoming less than we were capable of being. We were men in training and we could handle anything this film could throw at us! Take your best shot!

Needless to say we were appalled by what we saw. Stunned. Shocked. Sickened. Grotesque on a level none of us had seen before we were reduced to trying to ‘man up’ by making fun of the gore and pretending we weren’t scared when the sounds of a chainsaw (or, in a smart cheap scare, a motorcycle) roared out of the screen. Luckily there were enough ridiculous moments to allow us the respite of humor to salve our raw nerves. I’ll never forget one of my buddies’s stunned reaction to the killer getting into a small elevator with an intended victim while hiding the chainsaw under his coat. His ‘Is that woman blind’ was one the biggest laughs I’ve ever had in a movie theater to this day.

Although I didn’t know it at the time this was a turning point in my love of the movies. Not immediately but over the next few years I began to return to the horror genre more often and found that I preferred it to all others. The thrills of scary movies have remained my favorite viewing and exploring the European horror films has been the most fascinating area of this most frowned upon hobby of mine. Oh well.

Recently I’ve gotten the urge to revisit this movie. I know there are several cheap DVDs out there as somehow PIECES has fallen into Public Domain. But what I really want is a (God help me) Special Edition with extras. I know! I’m nuts. But there were rumors a few years ago of just such a thing from Grindhouse. And having discovered that the Spanish director of this one made a film called SLUGS a few years later I’m now interested in seeing more of Juan Piquer Simon’s…..oeuvre? With titles like MYSTERY ON MONSTER ISLAND, JOURNEY TO THE CENTER OF THE EARTH (soon to be released!) and SEA DEVILS on the list my curiosity is aroused. Of course, he also made POD PEOPLE which was one of the worst pieces of crap Mystery Science Theater ever heckled.

So, I’m looking over the various DVDs of PIECES and I’ve ordered SLUGS. I don’t know if I’m going to enjoy this venture into the movies of one of ’s least known horror directors but I’m looking forward to the journey.

Askinstoo said...
This comment has been removed by a blog administrator.
Tuesday, October 10, 2006

Askinstoo said...
This comment has been removed by a blog administrator.
Tuesday, October 10, 2006