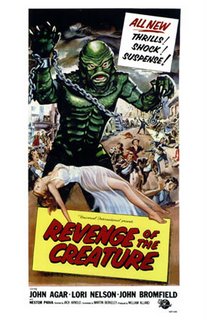 Long before I knew John Agar by name he was one of my heroes. He was the guy that took a cattle prod to the Gill Man, found a hidden underground civilization and blew up a giant spider in the desert- all without breaking a sweat! The fact that my adolescent mind could combine these three different movie roles and thereby turn Agar into a kind of superman is probably because he played similar characters in many films. Some might say they were often the EXACT same role. He was usually the smart, stoic, smiling fellow that could be counted on when the Mole Men attacked or a were-creature was stalking his fiance. These movies weren’t always very good (and Agar didn’t appreciate them at the time) but as film nuts in the 21st century have discovered his genre movies are always entertaining even if not for the reasons originally intended! Agar’s first foray into fantastic cinema was a sequel to the classic CREATURE FROM THE BLACK LAGOON. It’s not his best genre film but it did give him a key contact for later greatness.

Picking up a year after the first film REVENGE OF THE CREATURE has a couple of stalwart scientists types return to the Black Lagoon to capture the monster. Using dynamite charges (!) to subdue him they transport the amphibian back to Florida and set him up in Ocean Harbor for scientific study and public viewing. Ichthyologist Helen Dobson (Lori Nelson) and fellow scientist Professor Clete Ferguson (John Agar) begin trying to both communicate with the Gill Man and romance each other. Their romance is a bit more successful probably because Agar doesn’t poke Nelson with an electrified prod every ten minutes as he does the Creature. Finally the poor aquatic beastie manages to break free, kill a few folks and run off into the open water with gunmen in hot pursuit. Once again he has his sights set on a female and this time it’s Miss Nelson he goes in search of, putting her new fiance Agar on the offensive!

Director Jack Arnold made this as well as the first Gill man film and his strong guiding hand helps make this a fairly exciting monster romp. Though it pales in comparison to the original and makes the major error of removing the Big Guy from his jungle habitat its still a fun movie. Agar has made no secret of the fact that he hated making the series of monster epics he starred in in the 1950’s but here, as in all his performances you can see that he still threw himself into things 100%. That’s one of the things that make his genre movies so enjoyable- Mr. Agar worked hard to sell every scene, every time. This kind of enthusiasm pays off when the audience is asked to believe in incredible events and his earnest performances help sell all kinds of absurd situations. Its this aspect of what he did that makes watching Agar's films so much fun. He really seems to believe what’s going on and invites us to come along for the ride!

Agar does indeed rule! I think Dr. Gangrene wants to bear his children. Watching Revenge of the Creature in the last few years (for the first time since I was a kid) I was surprised at just what an weak film it is on the whole. When you're a kid, you're getting off on how much you get to see the Gillman, and that great escape sequence and the pushing over of the car...also where he throws the guy into the tree. Okay, I'll admit it, I love that stuff as an adult too. However, the costume is really inferior to that of the first film, and the climax is one of the most tension-and-suspense-less of the classic monster films. The Creature never really has a chance...he's facing a ton of guns, which do what guns do, with no problem. Pretty dull.

Well said! I have a similar history with Mr. Agar (and The Creature), and will sing his praises in a phone message to the B-Movie Cast this week. (Which just reviewed Curse of the Swamp Creature (no relation).) Probably because of Agar's presence, his monster flicks always entertain -- even the incredibly cheap ones. He brought class & conviction to everything he did.