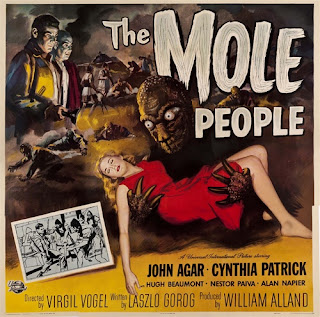 The Mole People starts with an amusing four and a half minute talk from college English professor Dr. Frank C. Baxter, in which he ruminates about various crackpot "Hollow Earth" theories. This mini-lecture on some of the sillier ideas postulated about our planet is an indicator that this movie is not to be taken seriously. When Dr. Baxter states that if we think about the film's implications, it has much to say to us in the 20th century, I get my first chuckle of many. I'd like to think this was slapped on the beginning of the movie as a wink to the audience but it was probably done to pad out the running time.

The actual story begins with archaeologist Dr. Roger Bentley (John Agar) working on a dig somewhere in Asia. (That's as specific as the film gets!) He and his team find a tablet fragment with indications of Sumerian origins. After a small earthquake they are shown an unearthed ancient oil lamp found at the base of a local mountain. Convinced of the possibility of a major find, Bentley and Dr. Jud Bellamin (Hugh Beaumont) mount an expedition to the mountain's summit. After much stock climbing footage — shades of 1951's Lost Continent! — they reach a high plateau scattered with crumbling Sumerian buildings. When a member of the team falls into a deep crevasse the men descend into the mountain and make the archaeological discovery of the century: a living Sumerian settlement cut off from the world for thousands of years! Amazingly the inhabitants have survived through the ages and maintained their culture and history. Most of the population has become albino, with extremely pale skin and a high sensitivity to bright light, while some have 'devolved' into hideous mole-like humanoids. These Mole Men are used as slave labor and are treated horribly by their masters. 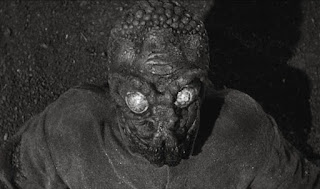 Using his still functioning flashlight, Bentley convinces the rulers that he's a messenger from one of their gods and starts romancing one of the rare Sumerian 'throwbacks' (i.e., normal-looking people), the slave girl Adad (Cynthia Patrick). Adad is a stunner with surprisingly fine make-up skills and a great hair stylist who takes to the manly Agar immediately. Good Doctor Bentley has the idea that he can effect positive change in these primitive people by keeping up the lie about being a divine messenger. But the Sumerian's High Priest Elinu (Alan Napier) begins to suspect the newcomers aren't what they claim to be after the eldest of the team dies. Wishing to retain the power he has over the king, Elinu has the two remaining archaeologists drugged and thrown into the city's execution chamber. But as this is being done the devolved Mole Men rebel at last, allowing Bentley and Bellamin to make good their escape with Adad in tow. 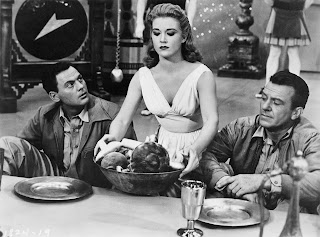 Silly, cheesy fun from start to finish, The Mole People never resembles anything close to reality. When our heroes encounter the Sumerians there is a very quick nod to Agars' ability to speak the (very dead) language but then all the other members of the party suddenly can as well. The mole men are treated as beasts and constantly beaten but never use their digging ability to escape their cruel masters. And of course, isn't Agar lucky to run across that incredibly rare 'normal' girl to romance and rescue? But with all the crazed fun this film offers it is Agar's character that gives the film its entertaining highlights. Arrogant almost to the point of annoyance, Bentley is so forward in the first third of the movie that it felt like he'd be the villain of the story. A pushy, arrogant ass, he really seems to be the guy most likely to get a harsh comeuppance until the final third when he slides jarringly into hero mode. I love the fact that the Sumerians mistaken assumption of divine powers meshed so well with Bentley's character. It didn't take much for him to start acting like a deity. I'm surprised his swelled head didn't give off a radiance of its own! 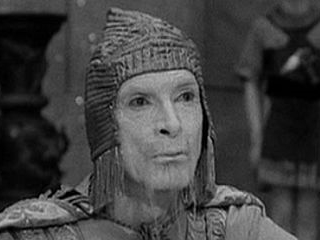 Adding to the strangeness on display is some of the dumbest dialog of any film of the period, with Agar getting the lion's share. That he was able to utter lines like "In archaeology all things are possible" with a straight face shows real acting skill. I love that someone asked an actor to say, "The thing that impresses me the most is the complete and utter silence — you can almost hear it." I live for this kind of wackiness. 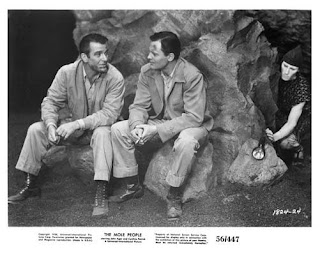 In the right frame of mind The Mole People is a blast and while never actually good, it still stands as a great example of the qualities fans love about '50s science fiction movies. It's very well produced, with all the right elements to make it a fun Saturday afternoon matinee. I love this film the way you love a not too bright pet that might chew up your shoes but is simply too cute to strangle. They don't make them like this any more... And maybe that's a good thing.

Now- Bring on the Blu-Ray!

I’ve always enjoyed this one. Cool monsters and an unexpected ending.