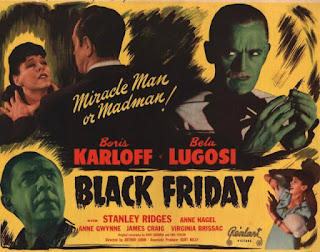 This month Troy and I return to our new series focused on the Universal Horror films of the 1940's. In fact, we leap to April 12th of 1940 for the release of the second such feature of the decade, BLACK FRIDAY. We were reticent to cover this one as neither of us had great memories of it even though it stars two of our favorite horror actors. This has always seemed the weakest of the Karloff and Lugosi pairings at Universal so talking about a low point for them felt like a bad idea. But, in the end, the chance to finally talk about those two screen greats was too enticing for us to pass up so we dove in to see what we would find on a return visit to the University of Newcastle.

We discuss the genesis of the script and it's original title including some information about writer Curt Siodmak's reuse of this story's central brain swapping premise. (Gotta cover Donovan's Brain someday!) Director Arthur Lubin's career gets some love with the tale of his history with Lugosi playing a part in how he handled the film. Karloff's incredible wardrobe is a constant topic of wonder as I ponder how much of the production's meager budget was spent keeping him looking so cool. And, obviously, the subject of the last minute casting change is discussed with reference to both Greg Mank's book 'Karloff & Lugosi: The Story of a Haunting Collaboration' and 'Universal Horrors: The Studio's Classic Films 1931-1946' by Tom Weaver, Michael Brunas and John Brunas. We are indebted to those fine books for our understanding of the production and it's background.

Near the end of the show we get to read out an email sent in by a listener with some comments and questions. If you want to do the same please write us at thebloodypit@gmail.com where we'll try to get back to you quickly. We love getting show ideas from people that enjoy what we're doing since it usually points us into areas we haven't considered for years. This episode closes with a pretty obvious song choice but it's Lugosi that has the last word. Thanks for downloading and listening!