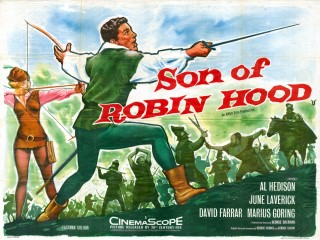 My recent search for lesser known Robin Hood films turned up this little-seen effort from 20th Century Fox. After the high of the excellent Disney version from 1952 I was perhaps a but too enthusiastic for the lower level of quality present here. Indeed, this film is pretty lame overall with only a few points of interest for adventure fans.

This story tales place several years after the death of Robin Hood with the aged remainder of his band of men waiting for the arrival of his twenty year old offspring. It seems the people of need a new leader because another oppressive ruler, Duke Simon Des Roches, has begun abusing his power. It is felt that a shot of the olde Hood spirit is just the right thing to set things right but a problem arises when it turns out that the child of Robin is of the wrong gender! Whoops! What else can be done other than enlist a strapping young lad with a desire for revenge against the Duke to impersonate Deering Hood and lead the new Merry men to victory. 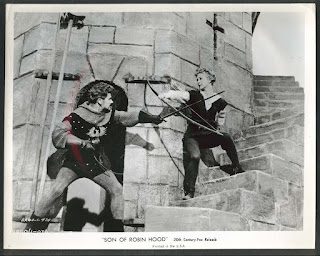 This is a pretty weak film with a tired script and not much in the way of thrills. There are a number of swordfight scenes but almost all are sub-par with little skill on display in either the fighting or the action choreography. David Hedison plays the rogue pressed into service as the Son of Robin Hood and it's interesting to see him post-THE FLY (1958) playing a dashing hero, even if he (wisely) doesn't attempt a British accent. But the movie is uninteresting with very little depth given to the characters and only one really exciting villain. 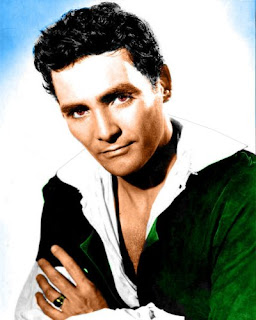 The DVD 20th Century Fox has issued of the film doesn't help elevate it's few qualities. The movie is presented full frame chopping off huge amounts of information on both sides of the Cinemascope image. Adding to this insult is the fact that film is in desperate need of a remaster and clean up as well. The colors are faded and the print looks dull and muted. I don't know if a better looking version of THE SON OF ROBIN HOOD would make it more interesting but it certainly couldn't hurt.

I’d must verify with you here. Which isn't one thing I normally do! I take pleasure in reading a put up that can make individuals think. Additionally, thanks for allowing me to comment! gsn casino