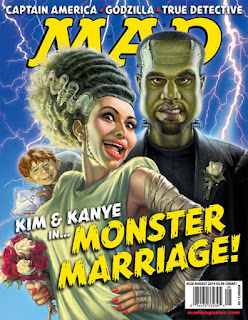 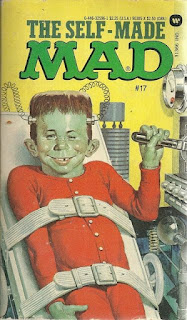 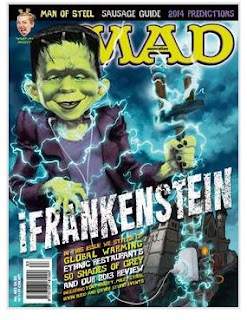 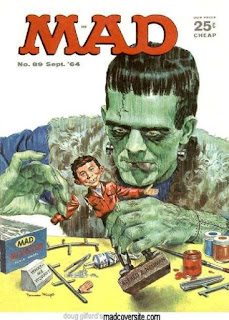 Sometimes an image just keeps popping up on my screen.

Posted by Rod Barnett at 9:48 PM No comments:


It's been far too long since I've been able to talk to Michael Schlesinger about movies but, luckily, he has a new batch of trailer commentaries popping up on THF! I have to agree with him about this film and the stunning output of Warner Bros. in the pre-code era. BABY FACE is a pretty sleazy tale!

Posted by Rod Barnett at 7:21 PM No comments: 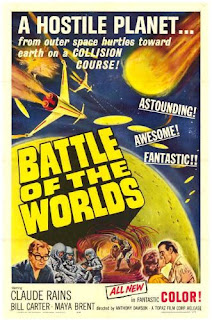 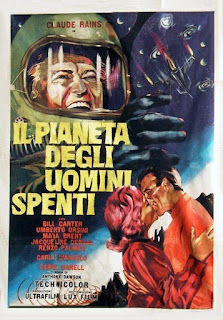 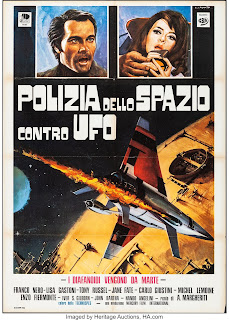 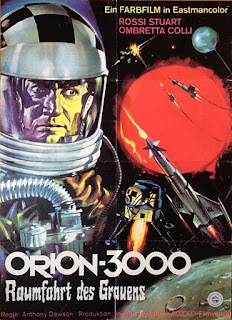 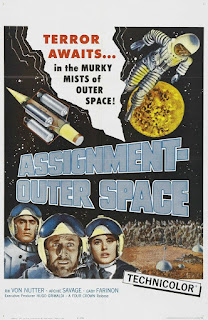 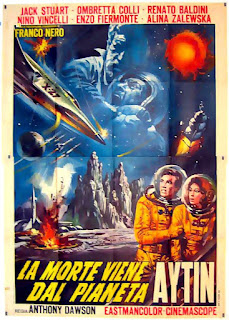 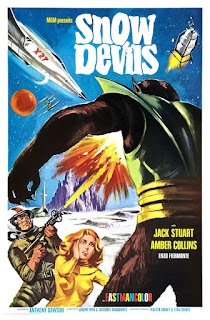 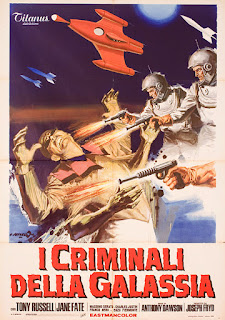 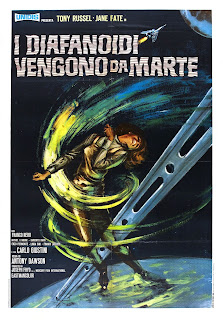 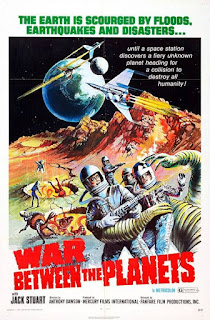 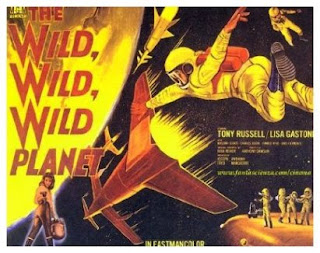 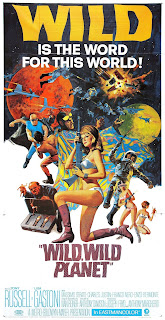 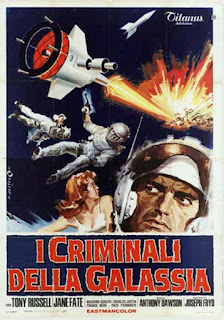 There are some......inaccuracies in a few of these advertisements. But they are all pretty great examples of what I wish poster art for science fiction still looked like!

Posted by Rod Barnett at 9:17 AM No comments: 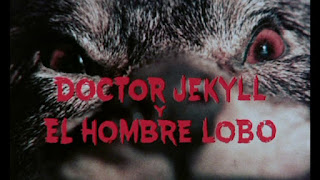 The year of new guests continues as the 10th anniversary celebration rolls on! This time we have only two people visiting but we talk to them for quite a long time.

Kat Ellinger has made a name for herself in film fanatic circles over the last several years as the editor-in-chief of Diabolique Magazine as well as writing for both that site and the British Film Institute among others. She is a prolific commentary track creator contributing to dozens of Blu-Rays ranging from classic Hollywood to arthouse cinema to Euro-Trash of the filthiest type! She’s even a podcaster, teaming with up with fellow female film fans to discuss cult movies in Daughters of Darkness and Helles Belles. And did I mention her book about the great Sergio Martino? Kat was nice enough to add her voice to this show and chose DOCTOR JEKYLL AND THE WEREWOLF (1972) to dig into. I had a blast talking with her and can’t wait to do it again! 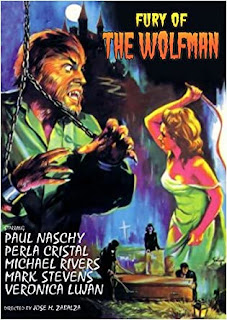 Robert Monell has been a guest on The Bloody Pit but never before on this show. His is the writer behind the amazing blog “I’m In a Jess Franco State of Mind” where he has reviewed and dissected the work of that Spanish filmmaker since 2006. He has since branched out into creating extras for various Franco Blu-Ray releases and moved into commentating on movies as well. He also runs the Cinemadrome film forum which hosts some of the most interesting discussions of cult cinema you’ll find on the web. For his visit to this show Mr. Monell chose one of the most problematic of Naschy’s werewolf films, FURY OF THE WOLFMAN (1970). He has some interesting things to say about it starting with digging into the probable origins of its basic plot. It is quite an interesting find!

Troy and I end the show with an extended dive into the mailbag to finally catch up on our backlog. We answer a lot of questions and take notes on possible future episode subjects. We can be reached at naschycast@gmail.com or over on the FaceBook page for the show. Let us know what you think and we’ll be back soon with more Spanish Horror!


I have to admit that even though I've watched this film a dozen times in my life I've only spotted a couple of the moving vehicles and people in these wide shots. But the digital removal of them does enhance the creepy emptiness of the L.A. streets making the images that much more effective.
Well done!

After having recently enjoyed Leigh Wannell’s film THE INVISIBLE MAN (2020) I finally backed up and caught his previous movie as writer-director UPGRADE (2018). Though not as impressive as THE INVISIBLE MAN it is a very good little movie that shows his future is definitely worthy of attention.

UPGRADE takes place in the near future where we meet Grey Trace, a mechanic that specializes in keeping older cars on the street for very wealthy collectors. One night while on the way home from a visit to one of his wealthy customers he and his wife are attacked. Grey’s wife is killed and he is left crippled from a shot to the spine. This injury leaves him a wheelchair bound paraplegic and his grief and depression lead to serious thoughts of suicide. Just then the wealthy and slightly sinister customer he was visiting the night of the attack offers to implant an experimental computer chip that will give him back his mobility. Grey agrees and then finds that not only does he regain the use of his body but the chip can communicate directly to his mind. Soon he and his new ‘friend’ are looking into the facts around his wife’s death while trying to hide the miracle cure that lets him walk again.

This is a very well-done film and I was glad to finally see it but all the time I was watching something kept nagging at me. There was something oddly familiar about it. Then my girlfriend piped up and noted that this movie was telling essentially the same story as VENOM (2018), the pretty crappy Spider-Man offshoot film from the same year. And she was right! The entire middle section of UPGRADE in which the protagonist is partially taken over by an entity that may or may not have his best intentions in mind is nearly identical to VENOM – only done much, much better. The scenes in this film that show the main character’s horror at what his body is capable of doing when controlled by an outside force are very much the same as seen in VENOM only much more intelligent by far. The super hero (?) film had cardboard characters, bad dialog, a ridiculous plot and an ending so sloppy and stupid that it might well be responsible for brain trauma in younger viewers.

On the other hand, UPGRADE is smartly written with an excellent mystery at its center and an ending that made me respect the film even more than the preceding events had managed to do. It’s a film with the courage to keep escalating its story and include enough well-conceived twists to keep the end point well out of sight until it sneaks up and slaps you. It’s a clever film that I know I will enjoy watching again with foreknowledge of the paths down which the tale turns. I can’t wait to see what Mr. Whannell does next!

Posted by Rod Barnett at 5:45 AM No comments: 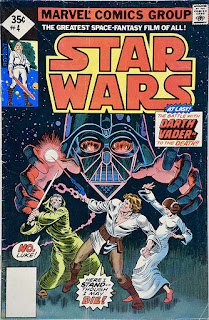 The past twenty years have made it difficult for me to be a Star Wars fan. When there was only the original three movies and hundreds of possibly non-canonical books it was kind of fun to occasionally connect with Lucas’ space fantasy tale to soak in the simple fun. But the prequels destroyed my ability to accept the larger SW world and, with those stupid entries, the obvious cracks in the expanding universe became impossible to ignore. The recently completed sequel trilogy was a mess of misplaced reverence and poorly chosen plot silliness that failed to do more than make me wish for the entire thing to just be done. Even the fact that I really enjoyed the two Disney produced stand along films ROGUE ONE and SOLO doesn’t make me much more of a fan, But those two side stories do make clear what I can still enjoy about the franchise.

When I was a kid the only ‘new’ Star Wars material readily available to excitement hungry fans was the Marvel comic book series. In between the 1977 film and the first sequel these comics told new tales of Han, Luke, Leia and the droids that were thrilling to our young minds and allowed the collective childhood imagination of what might be next to burst wide open. They were an amazing window into the possibilities for further adventures and, even if they felt slightly off sometime, we accepted these new stories like the starving devotees we were.

Of course, we were far too youthfully inexperienced to spot that the stories being told in these new SW comics were little more than direct steals from earlier things. I guess that we were so stunned by the cobbled together legends that Lucas stitched into his space opera script that it shouldn’t have been a surprise that the creators of the Marvel series would expect us to be clueless about their obvious plagiarism too. The first new Star Wars storyline in these four-color pages so blatantly lifts the plot of THE SEVEN SAMURAI (1954) by way of its western remake THE MAGNIFICENT SEVEN (1960) that it’s impossible to miss now. Han Solo is placed in the role of a man hired to help a bandit troubled village fight off the pillaging bad guys. He recruits a band of misfit drifters willing to do the job for minimal pay and then enacts the aforementioned story. Since STAR WARS (1977) was mostly based on Kurasawa’s THE HIDDEN FORTRESS (1958) I guess stealing from another Kurasawa films was considered the safest way to get the series off to a solid start. Although this multi-part comic book version might be the first adaptation of the SEVEN SAMURAI story into science fiction it would be far from the last with the Roger Corman production BATTLE BEYOND THE STARS (1980) being the one that did the least to hide its theft.

Rereading these old comics as an adult has been an interesting experience. Now I can see how stilted they are and I’m amused by the things that Marvel invented that subsequent movies swept away. They are of their times in many ways that surprise me with some strange additions to the central characters that might have been better than the ones the sequels eventually employed. Overall, these comics are a fun sideroad that I suspect fans of later generations would have trouble enjoying. I’m well aware that the kick I get from them is largely based on nostalgia as I remember the ways these issues spurred my imagination. They are a colorful window into a fanboy past that allowed a young me to see possible futures spread out with near infinite opportunities for star-spanning adventure. I suspect that the sadness I can sometimes feel about the inept path down which Lucas eventually took the franchise is a sense of loss about what could have been. As these flawed comic books show, there was so much potential and it has (to my mind) been squandered. If only they had used that seven foot tall green rabbit in the sequel films….. 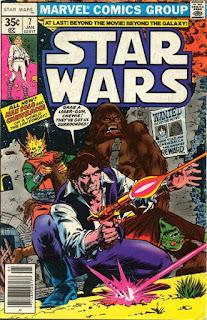 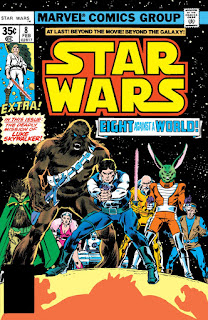 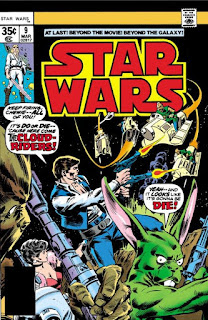 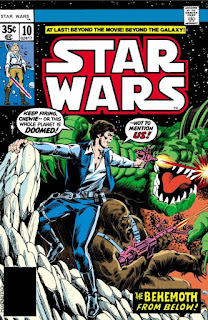 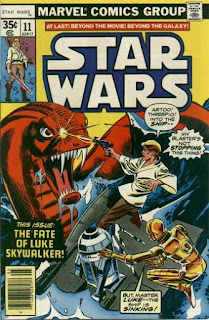