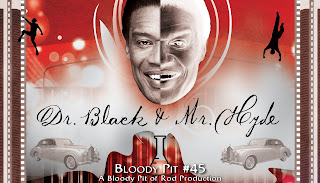 Larry Underwood and I have known each other for nearly thirty years. We spent our younger days getting into various types of trouble together but don't get to hang out as much as we'd like anymore. So when Larry suggested covering the blaxploitation horror film DR. BLACK MR. HYDE (1976) I realized that it just might be a good time to reconnect over some great 1970's cinema! Good call, Larry!

In recent years Mr. Underwood has become best known in as TV horror host Dr. Gangrene, a role he has played on and off for more than 16 years. As cool as that might be I'm an even bigger fan of his ongoing YouTube series TheFantastic Films of Vincent Price in which he is covering every single film with an appearance by the great actor. I highly recommend these fun examinations of Price's career and look forward to the 1970's era. Cool stuff!

In this episode the two of us settle in to look at DR. BLACK MR. HYDE and take the time to discuss the surprisingly small sub-genre of which is a part. I really thought there were a more films of this type! Regardless, this film is a good representative example of the genre with some great performances and a complicated main character at it's center. The movie has a few variations on the classic Robert Louis Stevenson story playing with expectations about motivations in some neat ways. The film also goes out of it's way to comment on race and class in American society. Bernie Casey and Rosalind Cash are the big name stars but it's born actor Ji-Tu Cumbuka as a police officer investigating Hyde's crimes that steals every scene he is given. I would have been happy to see a sequel film just about him and his cop partner.

If you have any comments or questions about the film or the podcast the email address is thebloodypit@gmail.com. Let us know what your favorite Blaxploitation Horror film is or your favorite Blaxpolitation film of any sub-genre. Any other TRUCK TURNER fans out there? Thanks for downloading and listening.