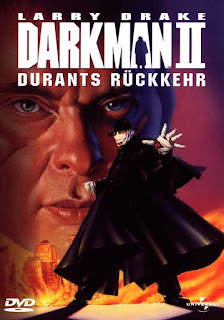 Because the great podcast Cinema Psyops recently covered all three DARKMAN films I decided to revisit the direct to video sequels. I certainly hadn't seen them in over twenty years and was looking forward to peeking back to this little superhero cul-de-sac to see if the films held up as anything more than wastes of time. Knowing that that have been no attempts to do more with the franchise in over two decades I expected to find both films to be disappointing. And, of course, knowing that they were cheaply made and only released to video dialed down my expectations as well. Luckily, I found the films to be very entertaining. Neither of them are classics of the genre and they certainly don't measure up to the nasty but fun original but, for what the are, they are solid little films.

The first of these sequels is the better of the two even if it requires the viewer to believe the impossibility that somehow Robert Durant survived the helicopter explosion of the first film. I'm willing to go along with this bit of silliness because it allows the excellent Larry Drake to return in the role and chew scenery like a mad dog. If the movie had been nothing but Drake disciplining his henchmen and making evil plans for 90 minutes I would have had just as much fun. It really is a joy to watch him sling his large vocabulary and perfect diction around as if words were weapons capable of severing fingers and crushing obstacles. Happily the film also offers up a lot of well done action and enough explosions to make smile. Even the switching of lead performer from Liam Neeson to Arnold Vosloo is handled well and Vosloo does a good job of owning the role of crime fighting mad scientist. 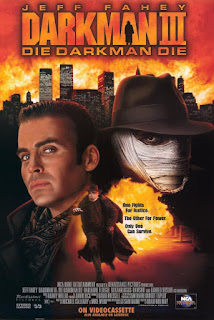 The third film is less fun but still well done. The villain is played well by Jeff Fahey and, although he is good, the character has much less panache than Durant and therefore is less interesting. With this film it was clear that they were setting up a structure for the series if it were to continue. Darkman would continue to hunt for a way to permanently repair his damaged face and hands, be thwarted by criminal scum and then be forced to destroy said scum by either his incredible rage or in order to save innocent people. Much more has been made from much less. Our hero now has a cool underground lair accessible by converted rail-car in which he conducts his experiments to create artificial skin. To fund his work he ventures out at night, slaps criminals around and steals their money which strikes me as the perfect modus operandi for a vigilante superhero.

Although the first film remains easily the best of this trilogy I was glad to see that the entire series is pretty good stuff. I suppose the rentals on these two DTV films weren't good enough to make Universal finance more and that's a shame. I could have happily watched another six of these movies over the next five years but it seems that Darkman is fated to be one of those forgotten franchises.

Maybe I should look into the comic books that were produced with the character?

My name is Paulo Leite, writer/producer of INNER GHOSTS. Directed by João Alves, INNER GHOSTS is being produced in Lisbon with a predominantly British cast: Celia Williams, Elizabeth Bochmann, Iris Cayatte, Norman MacCallum and others. Currently, the film is in sound post.

We’ve been working for months in a big Kickstarter campaign scheduled for mid April. The goals are getting some extra money so we can get better services, but more than that, we hope to connect with the horror community. We invested a lot of time in developing and writing a great script that we hope will resonate with horror filmgoers who really want something fresher.

With that in mind, we would be thrilled if your blog would join our list of selected blog promoters before and during the campaign. We will include your blog name and logo directly in our Kickstarter campaign page, our website, blog and in the film’s end credits. We will also be tweeting about you to our 25K organic followers. If you are interested, we’ll send you our press kit and we’ll be fully open to discussing exclusive pieces for your blog. Let me know what you think. Our campaign will be launched in April.

You can write to me directly at badbehavior@badbehavior.pt
In advance of our campaign, we are giving for free a full book we wrote: MUSIC LICENSING FOR FILMS: WHAT A YOUNG PRODUCER SHOULD KNOW. But we have so much more in the campaign. Take a look at the book (and the film) here http://innerghosts.launchrock.com/