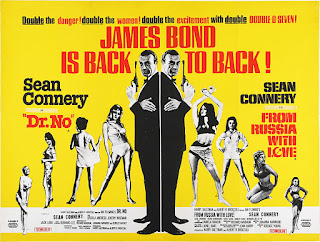 When the news broke last month that Sean Connery had passed away it didn’t come as much of a shock. He had made it to 90 years of age and I can’t be the only person that was surprised that he had such a long run. For decades he had been the epitome of masculine charism onscreen even as he aged into an elder cinema statesman in dozens of movies. Able to project calm no matter what chaos surrounded him and believable as an intense man of action regardless of the crazed nature any film’s plotline he was more than a movie star – Connery was a legend. His entire career he was underestimated even though he was a supremely talented actor who made what he did seem effortless. In fact, it may have been his skill at making it all seem easy that made it difficult for critics to acknowledge his ability. Of course, it was his performances as British spy James Bond that made him an international star even as the character became a weight around his neck. He tried for years to break away from that persona and succeeded to a large degree because of his determination to pick varied roles although it was another tough guy role that won him an Oscar in 1988. We will not see his like again.
Mark Maddox joins me to dig deeply into the first two Bond films DR. NO and FROM RUSSIA WITH LOVE. Finely crafted adventure tales they both stick closely to the Ian Fleming source material and, perhaps because of that, are fantastic spy tales. We talk about the films production with some added insights from the rare Criterion Laser disc commentaries that EON productions yanked as soon as they heard them! Mark brings his personal history with the character to bear explaining how his relationship with the movies have changed repeatedly over time. The differences between the books and the screenplays are discussed with some fun details about the possible reasons for certain changes. I make note of some scenes that the producers might have thought about editing from the finished movies if only to hedge their bets on mid-1960’s special effects. We also take a brief look at some of Connery’s post-Bond films to marvel at the variety of things he tried.
If you have a special place in your heart for Connery and his portrayal of James Bond let us know. Which of his films is your favorite? How many of his 1970’s movies have you seen? Write the show at thebloodypit@gmail.com and we’ll add you to the discussion next time. Thanks for listening!
Apple Podcasts LINK
Direct MP3 file Download LINK
Posted by Rod Barnett at 9:07 AM

Love the films and -- now semi-famously (because I keep saying it) -- FROM RUSSIA WITH LOVE is the 2nd movie I ever remember seeing in the (drive-in) theater, because it was 2nd on the bill that night.

But as far as following the stories... I think they totally missed the boat on DR. NO by leaving out the plot to corner the guano market (and the Doc's ignoble end) and, far more importantly, the death-trap with the giant squid. Oh, and Honey left chained up naked to be eaten by crabs. Which I think is right, though I only read the book once about 45 years ago. :D