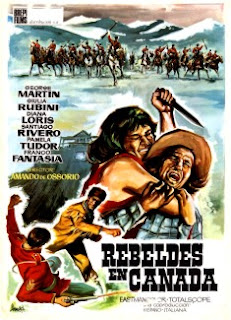 A few years ago, when Troy and I got the job do a commentary track for an Amando De Ossorio film I decided to track down his earlier movies as part of my research. I felt it would be a good idea to get a sense of what he was doing then to get into the position to be able to create his Blind Dead films as well as his other horror movies. I knew that seeing his first features outside the horror genre would allow me to see his progression as an artist. Among these early pictures was one that I was very happy to spot among his list of credits called REBELS IN CANADA (1965). It's generally described by Ossorio and his biographers as one of a couple of westerns he made for producers to prove that he could bring in a film on budget and on time. But for me it was a chance to see one of my favorite horror filmmakers from Spain trying his hand at a Canadian Mountie movie! Rare indeed. 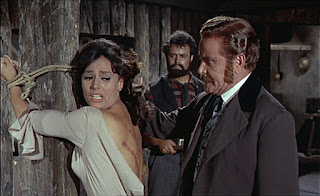 Long time readers of this blog will realize that I have a soft spot for tales of the Canadian Mounted Police for no good reason that I can really put into words. I have been fascinated with them ever since reading a collection of Pulp short stories centered around the Canadian police force years ago. I especially love with stories of this force that take place in the late 1800's so this film check marks several of the boxes to get me interested. I was excited recently to discover that this movie, under a different title, has now been released on Blu-ray. Having really enjoyed the film even just above and beyond my general love of Canadian Mounted Police stories I was happy that I would eventually be able to tell people that they could see this movie without resorting to the darker corners of the internet. I’m pretty sure this is the first time REBELS IN CANADA has been released on home video in the US but, sadly, I have to report that the MVD Classics Blu-ray of this film under the title HUDSON RIVER MASSACRE is extraordinarily subpar. 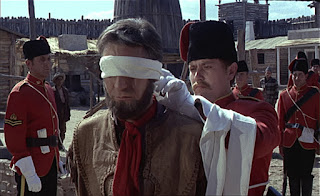 The print of the film used for the Blu-Ray is bright and colorful but the film has been mastered onto the digital format very poorly. If the image is still things looks great but the second there is any movement the picture becomes grainy and smears appear. I’m not well versed enough in the art of crafting high definition product to know exactly what went wrong but it seems as if there was not enough care taken to make sure this obscure little movie looked as good as possible before slopping it out onto disc. It’s a complete failure of quality control that makes suspect the entire MVD line might be as poorly done. This a real shame as the movie is a pretty good film with a few surprises and one really impressive battle sequence along the way. Lead George Martin is an acrobatic actor with the perfect look for these kinds of tales. He does his job well even in the sometimes violent action scenes when the bloodier side of the director’s leanings come to the fore. The female cast is strong, playing out the typical clichés of this tale with verve and energy. Top marks to Diana Lorys as a singing salon girl who loves Martin’s character but can’t catch his attention. My research tells me that there is possibly a longer version of the film out there someplace but it seems never to have been brought to video anywhere in the world. (I’ve hunted!)

If, like me, you are curious to see Ossorio’s early non-horror output this is a film to seek out. I wish the Blu-Ray was better but if you can find it for a cheap enough price it will allow you to at least see this rare northern adventure. Maybe someday another company will take the fine print used to make this disc and process the picture for a better looking disc. This isn’t a great movie but it worth seeing especially if you have a fondness for the European westerns of the period. Or Canadian Mounties!