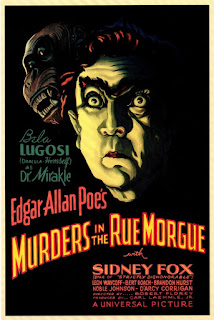 Mark Maddox returns to the show to talk about one of the more overlooked of the Universal horror films of the 1930’s - MURDERS IN THE RUE MORGUE (1932). This movie’s lack of attention may be because it doesn’t have one of the classic monster characters as a draw or, possibly, because it is one of the darkest, nastiest sixty-one minutes the studio ever released! Luckily, I don’t think it will remain as underseen in the future as it has just gotten a tricked out new Blu-Ray release which gives the film the best visual presentation it’s ever received on home video. The picture is so sharp that you can almost see the evil thoughts as they flicker in Bela Lugosi’s eyes! 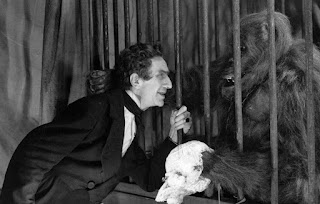 We start the episode with a brief discussion of some of some of the projects Mark has coming out soon including some fun information about the genesis of his cover art for the upcoming Blu-Ray of Hammer’s EVIL OF FRANKENSTEIN. We then move into a rather scattered discussion of MURDERS IN THE RUE MORGUE, jumping from one topic to another as we explore the qualities that make it a unique part of the decade’s horror output. Lugosi’s masterful acting is examined along with his bizarre uni-brow. That is one strange look! The not-so hidden strain of bestiality embedded in the story is touched on as well as the fears of a Darwinian view of the world that the script uses to terrify its audience. We disagree about the inserted chimp scenes but both of us find some generally held ideas about this movie to be a bit silly. We bring up the legendary first edit of the film along with Tim Lucas’ Video Watchdog article (in issue #111) in which he proposed a way to re-edit the existing film to approximate the director’s original version. It’s a shame there wasn’t an attempt to include such a variation for the new Blu. 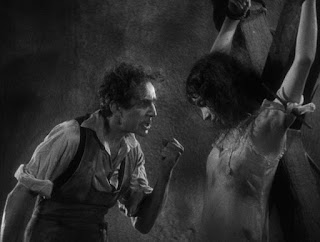 If you have any thoughts about this film or any other that we’ve discussed on the show, write to us at thebloodypit@gmail.com or over on the Facebook page. Mark will return in a few weeks to talk about another movie so you could even ask him some questions directly, if you wish. Thanks for listening!