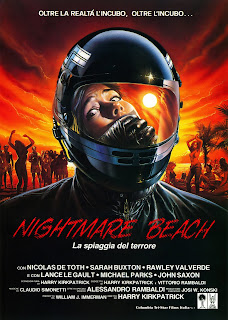 This episode presents a first in that my co-host goes by a pseudonym! (Even Cort Psyops uses his real first name!) On podcasts he calls himself Bobby Hazzard which is quite different from his actual name. The fact that I managed to not call him by his real name for the entire show may be evidence of divine intervention! He is the host of several fun shows of his own including Spring Break Forever which might explain his fascination with the film we cover on this episode of The Bloody Pit. He and I cover a slasher film from the late 1980’s which is a bit of a surprise for me. I spent a good deal of my youth disliking the genre until I was finally exposed to enough good examples to develop a change in my sensibilities. There are good and bad films in every genre and the slasher is no different. 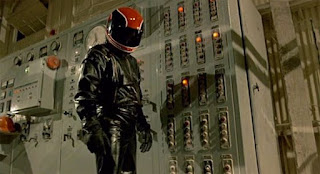 Also released as WELCOME TO SPRING BREAK this Italian production is now primarily known as NIGHTMARE BEACH (1989). Like a number of these genre films this was shot in the United States to take advantage of the financial deals being offered by certain cities at the time. This explains why the majority of the cast is American or Canadian making this look as much as possible like a movie made with Hollywood money. This was standard at the time to make sales of the film around the world more lucrative and, along with the use of pseudonyms in the credits, makes the product seem fully North American. But the oddity of retaining many elements of the giallo genre over the standards of the slasher makes this film feel very much a continuation of that very Italian genre. And, once the script throws in tropes from popular Spring Break comedies and enough distracting characters to keep your mind off the central mystery, this becomes a pretty entertaining ride.

Join us for a fun trip featuring sunny beaches, wet t-shirt contests, angry biker gangs and bizarre electrocutions on this episode. If you have any comments the email address is thebloodypit@gmail.com and the show’s FaceBook page is still active. Thank you for listening to the show!