What I Watched in March 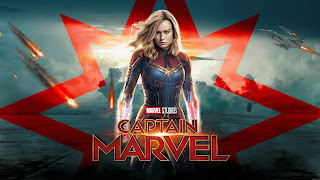 Captain Marvel is another step along the decade-long trail Marvel has been laying for their Cinematic Universe. And it's another good one! The story and characters are the best parts of it which isn't always  true of films built to present action an spectacle. As a longtime fan of the Carol Danvers / Ms Marvel / Captain Marvel character I was very excited to finally see her brought to the big screen and the fact that she's clearly going to play a huge part in the Marvel Cinematic Universe going forward is totally exciting. Carol Danvers is a character that was not always handled well on the comic book page with a couple of embarrassing stops along the way before finally getting to the Captain Marvel persona that seems to be the best fit for the character. In her original comic series writer Chris Claremont felt that he never got a good handle on her as a person and the less said about the sad events of Avengers issue 200 the better! 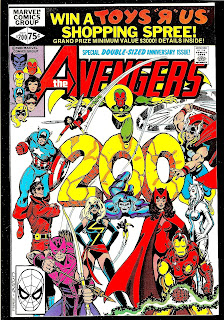 As a part of the Cinematic version of Marvel she is very well used and it'll be exciting to see how well she is integrated as she continues in future movies. The producers of these films very smartly backed up almost 15 years before the first Iron Man film to start her story. This shows her being introduced to a young Nick Fury, Agent of SHIELD as she also learns a good deal about her own hidden past. This, in turn allows both Carol Danvers and Fury to advance along their character's paths in a way that explains why Fury would know and trust her. It also explains why he wouldn't necessarily want or be able to call her for most threats that come along. This is a very fun way to organically include someone who's only now being introduced to the Cinematic version of things. And of course the fact that she is a space traveling character gives us a very easy out for the timeline when you think about how little the character seems to have aged between say 1995 and 2019. Smartly done and quite clever at times it overcomes some clunky exposition scenes by employing the amazing screen charisma of Sam Jackson, Brie Larson and the always welcome Jude Law.

I don't think this is a perfect film. I feel that while some of the action sequences are really dynamic and well done with the elevated train fight being my personal favorite, some of the action beats later in the movie are much less interesting. One in particular is a little predictable and not as well shot / directed as I wish it had been. In fact one of the action scenes felt so pointless that I just wanted them to get past it so we could get to the rest of the actually interesting story.

So, a good if not great new Marvel film that gives us a new superhero going forward. Cool! 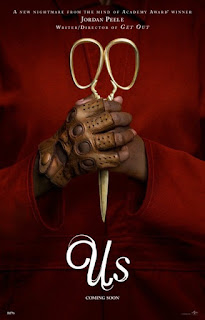 I find I must be the voice of dissent on Jordan Peele's new horror film (2019). Most reviews are praising this follow up to the writer/director's excellent GET OUT but I did not enjoy this effort. I didn't find it very interesting beyond just being curious to see if he was ever going to engage me with his story. It never really did and that's a shame. He is clearly trying very hard to bring some interesting ideas to the screen but I never gave a damn about anything happening.


I know what my problem with it is and it's a problem I've had before. Back when SNOWPIERCER (2013) was all the rage I was surprised by how little I liked it. I didn't think it was bad but it didn't thrill me the way it seemed to so many others. After a lot of thought I finally realized that I just could never buy into the world the film built. It never felt like something that was based enough in reality to exist or to fool me for it's running time. I just kept seeing how this entire world didn't make any sense. US has the same problem for me. Peele has crafted his film to be arch enough to wedge his science fictional idea into what should look and feel like the real world. But it never feels real to me. It always seemed as if there was some distance between the story and me which didn't allow me to buy in to anything. And by the time that things onscreen escalate to violence and it became obvious that the entire tale is nothing more than an extended metaphor I knew why I didn't care. Peele was doing what the makers of SNOWPIERCER had done years before by creating an entire story that is simply a metaphor with no solid grounding in reality. The social commentary overwhelms the story making the ideas being examined the only thing to hang onto. So, I didn't give a damn what happened. It is well made with some good performances and the basic idea IS interesting....... but not at feature length and not with enough time spent with the story to see how ultimately silly it's underpinnings are. Might this have been better served as an episode of the new Twilight Zone? I'll be curious to rewatch this in a few years to see if my attitude changes but right now I consider this an unfortunate stumble.